I’ve read a couple of articles recently that talk about the “phenomenon” of women not wanting babies.

The first article I read spoke to a woman who has been fighting for sterilisation rather than continuing to use contraception (which, let’s face it, can and does fail). She’s childless and knows she doesn’t want children. Ever. Yet she keeps getting pushback from health professionals who don’t want her to make that permanent decision.

Now, I’m firmly in the no kids camp. The idea of being a mother does nothing for me. I have no aching womb, no maternal instincts, and no desire to push a human being out of my front bottom. So obviously I’m going to defend her position and stand up for her.

But actually, regardless of your stance, isn’t it pretty disgusting that a grown woman with years of life experience is being told she doesn’t know her own mind? Complete strangers think they know her better than she knows herself? 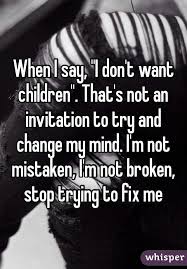 Why is a woman’s personal view on procreation such a big deal? Why is it everyone else’s business? And why, in this day and age, are we still expected to be baby makers, and frowned upon when we express a different view?

I appreciate that women who don’t want children are in the minority. Girls grow up with dolls and pushing prams and there is a certain unspoken expectation that they grow up and have their own kids. I was no exception. I grew up with that expectation of myself. Hell, at 20 I’d even picked out kids names with my then boyfriend (cringe). Because that’s what girls do. I thought I’d follow the path of meeting a boy, getting married, living in a semi detached house with a garden, having kids, and going for Sunday lunch at my parents’ house once a month.

My life now couldn’t be further away from that. The only conventional thing I’ve done from that list is get married. Outside of that I live in a flat, I spend all my money without fail every month, I drink too much, I have hangovers most weekends, I enjoy afternoon naps when I’m at home, I swear like a trooper and I fill all my space with clothes and shoes. I have no room in my life for a child – physically or figuratively. 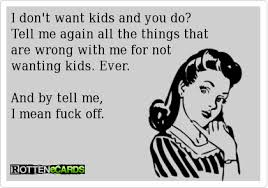 The great thing about this is that the husband feels the same. We were friends for two years before we got together, so we already knew each others opinion on children by the time anything happened between us. In fact he split up with a previous fiancée because she announced she’d be having a baby as soon as they were married, so he couldn’t really be clearer! We’re both only children, but neither of our families have expressed any interest in us giving them grandchildren (thank God!)

I can only imagine the pain and heartbreak it must cause if one person in a relationship wants something different to the other. It’s so important to set your stall. I don’t think there can be a middle ground with children.

And yes, I know that people change their minds. Maybe personal circumstances change, or they meet a new person with whom they want to share the joy of children. So in that respect I can see that the NHS is trying to avoid future heartbreak. But I’m sure, if you sit people down with an assessor or psychiatrist, you can tell the difference between those people who are on the fence and those who are a vehement no. In the meantime women are having to continue with contraception and, in some cases, dealing with unwanted pregnancies, simply because the powers that be think they know better.

And it’s not just professionals. Everyone seems to have a view. You get married and people want to know when you’ll be starting a family. Not just people who are close to you either. Work colleagues, shopkeepers, the window cleaner. Worse still, when you say never, the condescending “you’ll change your mind” statement. No I bloody won’t! Now bog off out of my business! 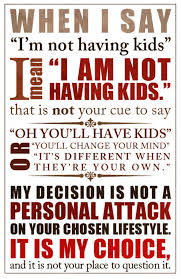 The temptation to tell people I’m infertile just to watch them squirm is immense. For the record, I’ve been told I’d make a brilliant parent (aside from the drinking, swearing and sleeping for as long as I like, when I like). I lived with my step brother and sister during my 20s, when they were 18 months and 3 years old. I looked after them, bathed them, cared for them, played with them and fed them. I adored them. But the difference was they weren’t mine. Ultimately they weren’t my responsibility. I was a part time participant when it suited me. The responsibility sat with my Mom and her husband.

In truth, I’d love to want children. I think it must be so rewarding. Seeing that tiny hand curl round yours, a smile that lights up when your child looks at you, or the cuddles and kisses just for being there. But I don’t want it. None of that is enough to make up for giving up the life that I’ve chosen for myself. That’s not being selfish. That’s being self aware.

Besides, you wouldn’t question a woman about the fact that she chooses to have children. You wouldn’t ask a pregnant woman if she was sure, or what would happen if she changed her mind. You wouldn’t try to cajole her by telling her she’d make a bad parent.

So why is it acceptable the opposite way around? 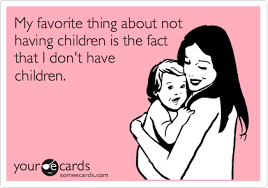 Maybe, just maybe, the NHS should start giving women the credit that they’re due, rather than treating our independent thoughts and beliefs as silly hormonal confusion and brushing them under the carpet.

19 thoughts on “The baby debate (with some really awesome memes!)”