One of the attractions of going to North Wales is, without doubt, the scenery. Stunning views wherever you look; the contrast between dense forests and sparse mountains, rivers that flow powerfully all year round due to the high rainfall (luckily only happened during the night while we were there, the weather was fantastic), lakes, bridges, waterfalls – it truly is a place of immense natural beauty.

I’m not much of an outdoorsy person – not that I don’t like being outdoors but there isn’t much outdoorsy stuff to do where we live and so we tend to spend our weekends going to the pub for lunch or chilling on the balcony. Certainly nothing particularly energetic. But just being surrounded by such beauty made us want to see and do as much as possible.

I can’t see a time when I will ever visit this part of the world and not go to see the Falls. They’re around 2 miles from the centre of Betws-y-Coed, right off the main road. We walked up, forgetting the incline and the heat before we started, it was harder work then we thought! £1.50 entrance and through a turnstile and you’d never believe that such a sight exists just metres from the road. The power of the water gushing down is immense.

There are various viewing points at differing heights. Nature at it’s best.

There are lots of different signposted walks in and around Betsy, with colour coded signposts to keep you on track. Some of them can be combined into longer walks, or cut down into shorter ones. The landlady at our guesthouse recommended the yellow walk to us, which cuts up through the forest and across to Llyn Parc. The walk continues all the way around the lake and back down, but as we had other plans for the afternoon we decided to get as far as the lake and then come back down.

Maybe (probably) we’re naïve, but anything that’s described as “a walk” sounds pretty civilised. And yes, we knew we were going uphill so expected there to be some level of energy needed, but we weren’t quite prepared for just how hard going it would be, at times. There was no path, fallen trees and boulders along the route.

On the ascent we were right in the middle of the forest, no-one around, sheer drops off the side of the hill and 30 meter tall trees surrounding us. Oh, and no phone signal! We were walking 50 metres and stopping to rest our burning lungs! Us city types, eh! But we powered on, and at times found ourselves on an actual path which levelled and widened out and we were treated to hedgerows of bracken and foxgloves, with butterflies flitting in and out of the undergrowth and birdsong all around us. The isolation and sense of achievement was fabulous.

The walk back down was easier, although still treacherous in spots. 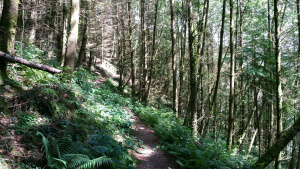 This house is literally in the middle of nowhere. It has no electricity. Sanitation comes from collected rainwater. Incredibly it’s a holiday home! I like getting away from it all, but that’s just too much.

We could hear the waterfall through the trees way before we reached it. It started from a little babbling brook.

Pretty freaked out by what looks like a dungeon built into the rock! 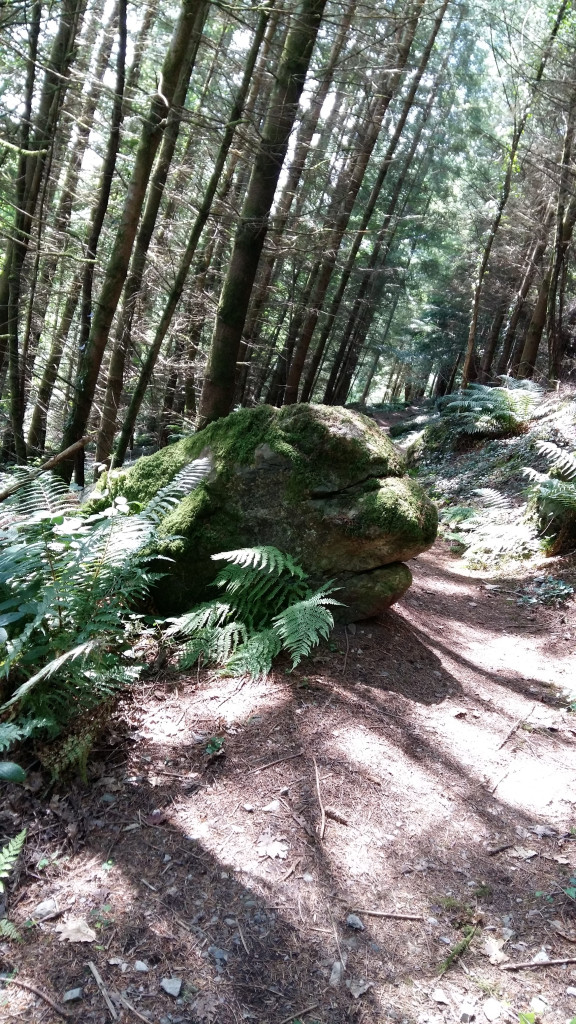 Back in civilisation (!!) our wanderlust was well and truly awoken and we couldn’t wait to see more.

The bridge in the middle of the village is a big attraction, with people always to be found looking down to the river and the rocks below. 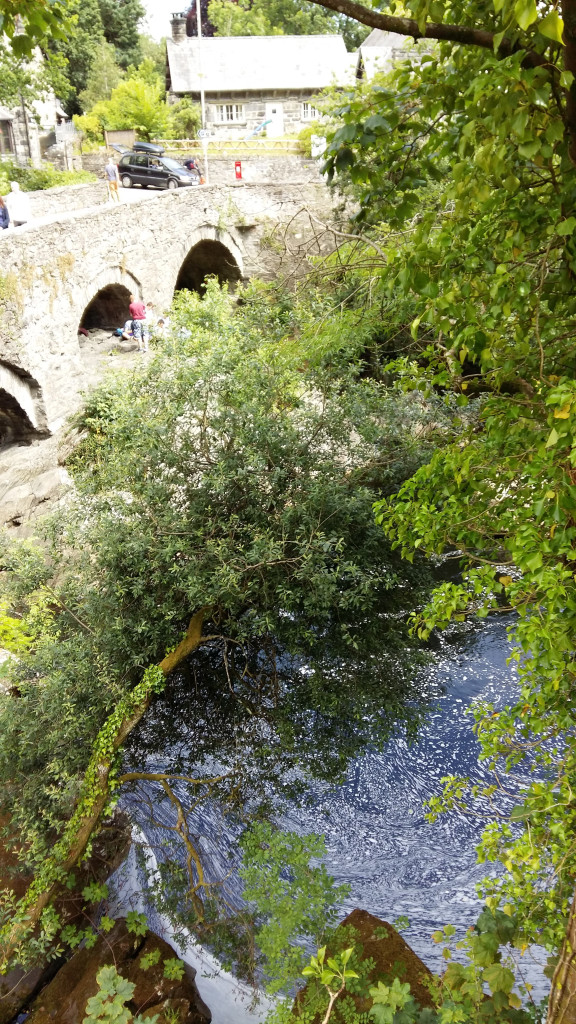 The river is very shallow in places and my feet were burning from the walk, so I had a cheeky paddle! 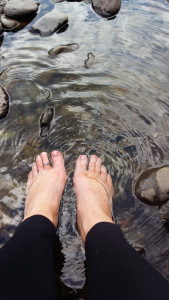 You can see a wizened old face in this uprooted tree. 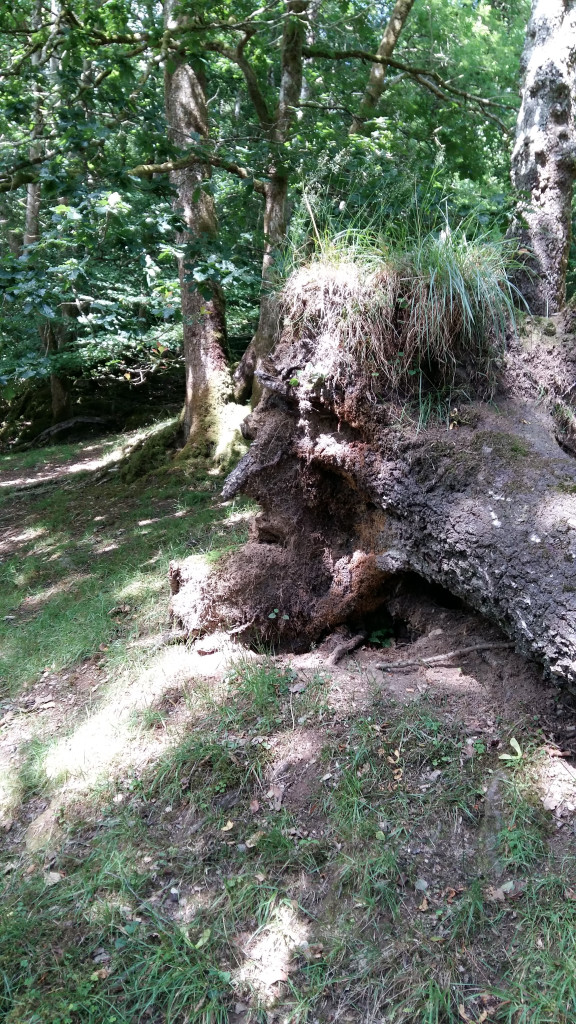 The landlady suggested we do this in the afternoon, after the Gwydyr Forest mountain hike (I swear it wasn’t a “walk”) so again we assumed it would be easy. Wrong! The path was clear and well established, so we weren’t negotiating tree routes and forest growth but it was bloody steep. The type of steep that burns your calves. At times I was holding onto trees purely to stop myself from sitting down and not getting back up.

We were both puffing, red faced and sweaty, but kept going thinking that the lake must be just around the corner. When we finally reached the top I don’t think I’ve ever been so glad to see an expanse of water!

Buoyed (geddit?) by our perseverance we decided that we would walk all the way around the lake as well. The  guide book said it was mainly flat. The guide book lied. Still, we powered on, resplendent in our newly found status as true mountaineers. The views were fantastic.

Husband’s phone pedometer recorded an amazing 11 miles walked in one day! Not bad for someone who jumps in the car to pop to the local shop for milk. 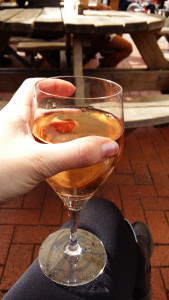 It’s fair to say I’d earned the glass of wine (or two!) I rewarded myself with at the end!

3 thoughts on “Waterfalls, forests, rivers and lakes – we’re not in Birmingham anymore Toto”