Wow, what a fab time I’ve had in North Wales. The beautiful Betws-y-Coed, or “Betsy”, is the gateway to Snowdonia National Park and is a pretty green and mountainous haven for a City girl like me.

We spent a weekend there last year, with my Mother in Law for her birthday, and were so taken with the village, the guesthouse and the scenery that we vowed we’d be back. Despite my wobble a couple of weeks ago (and thanks to Lisa for talking words of wisdom to me!) we approached it with much excitement. It turned out to be even better than expected. 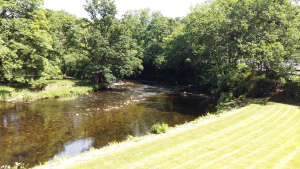 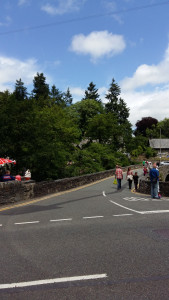 St Mary’s church is a big imposing structure right in the middle. It dates back to 1873.

As well as being picturesque and well placed for sightseeing, mountain climbing and venturing further afield to the Isle of Anglesey, the village has some really good restaurants, which we were surprised at last year. The quality of the ingredients and imaginative menu listings aren’t what you would expect from a small Welsh village.

It’s been a visual and gastronomic delight.

This is, without doubt, the best guesthouse I’ve ever stayed in. It’s perfectly located, beautifully decorated and extremely relaxing. More than that, the owner is fabulous! One of the reviews of TripAdvisor describes her as the Welsh Mary Poppins. Nothing is too much trouble – from special breakfast requests through to lending maps and advising on days out; she always has time for a chat and her wealth of knowledge and passion is amazing. Afternoon tea and scones on arrival, fresh mineral water and biscuits in the bedroom and fresh flowers everywhere make for a delightful stay. I absolutely cannot recommend this place enough, if you were thinking of visiting the area.

Where we ate, evening one Ty Gwyn

This 17th century coaching house is positioned at the entrance to the village and is very popular – booking is essential.

We missed out last year as we didn’t book in advance and so were determined to not make the same mistake again. There is a restaurant – which is slightly more formal – a lounge and the alcove, which has just three tables. The menu is the same across all three rooms. They also have rooms, including romantic four poster bed rooms and a honeymoon suite. The decor is rustic and welcoming; white washed walls, oak beams, lots of brass and rugs and low lighting.

We both started with king scallop, prawn and crayfish gratin; followed by lamb and duxxel wellington for husband, and fillet mignon roulade for me. The roulade, rather than being wrapped in pastry, was wrapped in bacon! And stuffed with cheese and spinach before being smothered in creamy peppercorn sauce. There were lots of yummy noises coming from our table. Because I was on holiday (!!) I had already decided I was indulging in a dessert and the honeycomb, ginger and chocolate cheesecake did not disappoint.

I magnanimously shared it with husband, even though I could have happily wolfed the lot. Delish.

This restaurant is part of the Royal Oak Hotel; there is also the Grill Room and the Stables Bar. We hadn’t booked, stupidly, but were told that if we just turned up we’d be seated when a table became available. We ate in the Grill Room last year and the food was very very good, although the restaurant was very hot. The River restaurant looks more formal, but that’s where we seated this time. Actually we needn’t have worried, because although the restaurant itself is decorated quite opulently, the clientele is very laid back. After all, “Betsy” is a base for walkers, climbers and outdoorsy types, so no-one is dressed up. We ordered from the Grill Room menu – scallops with black pudding and pulled pork, slow cooked rump of lamb with braised red cabbage and really really slow cooked pork belly. More yummy noises. There is also an a la carte menu served in the restaurant, which we’ll be sure to try next time.

As well as restaurants there are pubs and cafes – something to suit all budgets. I had a rather delicious lunch of beef and ale pie in the Stables Bar when we arrived, and a good old cheese and pickle sandwich in the beer garden at the Pont-y-Pair Inn on day two. Both were great!

I already can’t wait to get back there; I have a feeling it will become a yearly pilgrimage for us, and would happily go for longer next time. I’ll post tomorrow about what we got up to during our time there; the scenery is outstanding.

One thought on “Back from beautiful “Betsy” – what a weekend!”