If you’ve read this blog for a while, you’ll know that I’m vocal in my support for changing the UK law to allow assisted dying. Through that support and the blog post I initially wrote around it, I’ve been in contact with Dignity in Dying, who fight tirelessly to help change the law, and last week they invited me to attend a meeting in the House of Commons where they would be presenting their latest research. I jumped at the opportunity because it’s something I feel so passionate about, and I was keen to see how their findings would be received by the meeting attendees, including research assistants and Members of Parliament.

I’ve been to the Houses of Parliament many years ago, on a school trip, although the security is (understandably) a lot tighter these days. It’s still a very impressive building, even second time around; it must be strange for somewhere so grand to be your place of work. There’s currently a lot of structural work happening as the building is showing signs of decline (not surprising, considering it’s age) but the amount of artwork, gold leaf and carved stone inside is very impressive.

The meeting was to be split into two halves – the first 30 minutes consisting presentations to the room from DiD and people who have experienced helping others with assisted dying, and the second half opened to the floor for questions and debate. 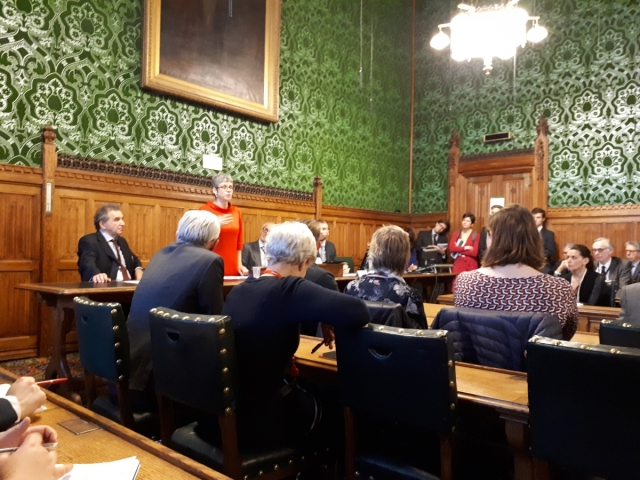 The presentations were, for me, so compelling that I don’t see a reason why anyone would vote against changing the law to allow the choice for assistive dying. My Dad’s wife was name checked as someone who had to help a loved one deal with the implications of not being legally allowed to go to Dignitas, which of course wouldn’t be necessary if assisted dying was legal in the UK. We heard from Carole Taylor OBE who, along with her husband Mick Murray, had accompanied two friends, on two separate occasions, to Switzerland to end their life on their own terms. Friends for a number of years, they’d talked in the past about how they would help each other if the time came. First was Anne, who was diagnosed with supranuclear palsy, and then, whilst he was still grieving the loss of his wife, her husband Bob following a terminal lung cancer diagnosis. That, to me, is proof that assisted dying isn’t scary or regretful. That Bob had accompanied his wife and seen everything that was involved and still wanted to seek such an end for himself is testament to the process and the compassion of all involved, and the strength of feeling he had around the alternative, which was to suffer immeasurably.

We also heard from Dr Simon Sandberg, who had accompanied a friend of many years to an alternative facility in Switzerland. He regaled us with tales of his friend’s vivacious nature, zest for life and commitment to his business; as well as as the positive way he faced his illness and his impending death. His situation got so bad that he tried and failed to take his own life by hanging before he got to Switzerland, and also to throw himself from a bedroom window. Thankfully he was able to make the final journey and end his life by choice, doing so with a great deal of humour and self respect.

Both of these real life case studies prove to me not only that it’s not a fearful process, as I stated earlier, but that knowing that assisted dying is an option helps terminally ill people to face their final months; knowing that if everything gets too much there is an option to take control and exit with dignity. As a friend, an old friend, with years of shared memories and experiences, or a family relation, it must be a difficult decision to make to help them end their life but also an incredibly easy one – you want to end their suffering and help them achieve a dying wish. The research conducted by Dignity in Dying reveals that of those people in the general public who support the case for assisted dying, very few are put off by the potential criminal investigation that might follow. The love and support they feel towards the person asking for help far outweighs any reticence around breaking the law.

The second half of the meeting was opened up to the floor for Q&A and debate. Of course, this was always going to be a mix of opinion, by very virtue of the subject matter. Interestingly Alex Chalk, MP for Cheltenham, commented that he has always been against assisted dying but, having heard the panel speakers, was shifting his views – if not in favour of changing the law, then certainly to a point of being less against it and open to hearing more about personal experiences. This is the kind of response that Dignity in Dying were hoping for; to have an audience with people who may not have considered the personal effect on family and friends and explain not just the physical side, but the emotional and mental side for all involved.

Unfortunately from there, MP for Worthing West Peter Bottomley muddied the water somewhat by quoting ludicrous figures about euthanasia in the Netherlands – neither relevant or conducive to the conversation; although, when this was pointed out to him, he refused to back down and kept repeating the statistics (after telling the room how he visits dying people in his constituency every 2-3 weeks as though that makes him qualify for talking rot and wasting valuable debate time). It’s fare to say that he riled a lot of people with his mis-information and pigheadedness although he was firmly corrected by Professor Bronwyn Parry who independently conducted the research for DiD.

As the meeting came to an all too soon close, Lib Democrat leader Vince Cable asked to make a point. He’d missed the presentations due to other commitments, so wasn’t fully informed, which I think applies to many politicians who don’t agree with a change in the law. He expressed concern using his own Mother as an example, that the process was flawed and could be taken advantage of. He said his own Mother has a history of mental illness and is suffering from dementia, and some days she says she doesn’t want to live anymore, whereas others she’s quite content. Thanks goodness Baroness Molly Meacher, member of the House of Lords and chairwoman of Dignity in Dying, was able to make the closing statement. Speaking to Mr Cable, she quite clearly told him “your Mother wouldn’t even be eligible to be considered for assisted dying. Every person would undergo a psychiatric evaluation to ensure they’re mentally capable of making the decision to end their own life on their own terms. People with mental illness or dementia arent mentally capable of making their own decision.”

Well said Molly! This is the absolute key to the change in the law we’re campaigning for. Assisted dying would only be available to people with less than 6 months to live who are mentally competent. In truth, of the people it would be available to, only a small proportion would go ahead with the process. But knowing that they could choose that option if the pain and suffering became too much, without having to make travel arrangements and spend thousands of pounds and legally implicate family and friends would be of great mental comfort to them.

On a more positive note, it was great news that Noel Conway won his right to appeal an earlier decision rejecting his case for the right to die. It’s appalling that Noel had to go to court to even seek permission to appeal, but the law’s an ass and rules are rules. Dignity in Dying will continue to support Noel in his personal endeavour, which would of course have further reaching implications for other terminally ill people in the future.

How brave and inspiring of Noel to be fighting such a fight at a time when his own life expectancy is limited. And how unfeeling of the legal system to put him through what should be a personal right.

If you would like to support Dignity in dying by donating, becoming a member, or campaigning, you can find more information on their website.

2 Comments on A visit to Parliament with Dignity in Dying