I was thinking just the other day how I haven’t done a Q&A tag post in ages, and then the lovely Tina from Tea is for Tina tagged me in this one. You can read Tina’s answers here.

If it’s that easy to influence the future then please could someone give me a million pounds? Ta!

Anyway, onto the questions, and my responses!

You are leaving tomorrow to start a life in a new country, where would you go?

I think it would have to be the US. There’s no language barrier and the country is so big and varied that you could holiday and travel there and see so much. Internal flights are pretty cheap and as convenient as catching a bus. I’d base myself in the Los Angeles area for the great climate, and plan visits to New York, Dallas, Nashville, Niagra Falls and Miami, and a return to San Francisco, as a matter of priority.

You can take someone for a weekend away to the place you had the best holidays ever, where would that be and who would you take to go with you?

It would probably be the West Hollywood neighbourhood of Los Angeles, with the husband. We’ve been there 4 times and had some amazing experiences. Even though we’ve done it all before, every single time has been fabulous, and would be a pleasure to recreate.

This would be my schedule:

Saturday – We’d stay at the Mondrian on Sunset, as usual, and have breakfast at Mel’s Drive-In (which is the coolest 50s American diner ever, check out the photos!), go to Griffiths Observatory for the planetarium show and the views, spend the afternoon by the hotel pool, have early evening sushi at Katana (the first place I ever tried sushi, and it was amazing!) and Happy Hour frozen margaritas at Cabo Cantina then shower and change before heading down to Sunset Strip for drinks at the Whisky a Go Go, maybe catch a band, then grab a booth at The Rainbow and eat one of their amazing pizzas.

Sunday – bottomless mimosas and a breakfast burrito at The Saddle Ranch, then bus down to Santa Monica, wander round the pier and go on the big wheel, hire bikes and cycle to Venice Beach, look around all the stalls and talk to the crazy people, back to Santa Monica for a bit of shopping and some late lunch, then back to We-Ho to play rock music on the jukebox at the Rainbow, maybe get another photo with Ron Jeremy and then finish the night with burgers and milkshakes in Mel’s.

God that’s made me miss LA!

You can get married wherever you want to, your budget is limitless, what is your choice?

We got married on a beach in Mauritius which was pretty damn special, and I wouldn’t change that in any way.

I’d quite like to do a renewal of vows in Las Vegas though, officiated by Elvis!

During your travels you can bring back home one animal as a pet, which one would you pick?

A panda. No doubt. They’re so cute and playful and cuddly. And naughty – watch this video to see my point!

I don’t know why I don’t have one as a pet already.

You can get back in time and relive one family trip, which one?

A week in Greece with my Dad. I blogged about it here. Things were pretty fraught between us after my parents’ divorce and the holiday not only fixed our Dad and daughter relationship but strengthened it no end. Plus the location and food and climate was just so idyllic and beautiful – I’ve actually been back 3 times since.

What is the first thing you would pack for a one year travel around the world?

What would your fantasy 100th birthday destination be, and why?

I don’t want to live to 100. Sorry to be miserable, but it would be too sad going somewhere and not being able to do everything it had to offer.

During your travel you can learn one sport to become a pro, what would that be?

I’m not a sporty person at all and don’t really crave to be, but it would be nice to be able to surf. Or maybe snowboard.

I lack the coordination to ever be able to do either!

Plus surfing is so wet, and snowboarding is so cold.

Does drinking sangria until I fall over count as a sport? 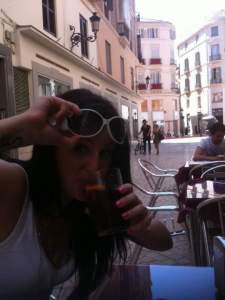 Now it’s your turn! I tag anyone who wants to get involved! Specifically Danni Jane at A Beautiful Thing, Hailey at The Undateable Girl’s Diary, Ellen at What Ellen Wrote and Emmalene from A Brummie Home and Abroad because they all love travel.

But if you’re reading this and want to complete the questions yourself then please do so! Make sure you leave the link to your answers in the comments, so I can be nosy!

Here are the questions:

11 thoughts on “The Travel Tag”