Anyway, as I’m off to Greece in just 10 days time (woo and hoo!) I thought I’d talk about my first ever time on the Greek Mainland, in my early 20s.

I love Greece. Adore the place. The people, the climate, the food, some more of the food. Mmm…food. Greek cuisine is right up there with the best in the world, for me.

Greece is my first choice of holiday destination if I’m looking for a chilled, relaxed break with guaranteed enjoyment.

The first time I ever visited the mainland was with my Dad. After my parents separated things became fraught between me and my Dad for a while. I hadn’t taken sides in the split but I was living with my Mom, and she had a new partner which my Dad found difficult to deal with, especially my acceptance of it. In an attempt to build bridges I suggested that the two of us go on holiday.

Both having a love of Greece from previous visits to the islands, Dad suggested calling the travel agent (as you did in those days, before cheap airlines and hotel comparison websites, god I’m so old!) and finding out what was available within a few days; somewhere “typically Greek”. The travel agent suggested a place called Stoupa, which neither of were familiar with. It was described to us as being a small village on the Mani peninsula, with a mountainous backdrop, a handful of tavernas and bars and a very relaxed atmosphere. It sounded perfect.

And perfect it was. We arrived at Kalamata airport at around midday on a hot Sunday afternoon, after a 3am start from home. I hadn’t been to bed the night before as I was still packing so I slept all the way to the resort. On arrival we were shown to our apartment, which was a 2 story house, split into 3 apartments. We had loads of space, two balconies, 2 bathrooms and a fully equipped kitchen. It was very much a home from home.

After changing into shorts we wandered down towards the direction of the sea, passing small tavernas and shops. As we reached the end of the narrow street the whole of Stoupa opened up in front of us. A horseshoe shaped bay with a sandy beach and sparkling blue sea. Stepping out and looking backwards we saw the mountain backdrop promised by the travel agent. We fell in love with the place immediately.

It was a week of lounging in the sun, reading books, sleeping and eating amazing food. We took an organised trip to the Diros Caves. We walked to Agios Nikolaos. And we overcame our difficulties and had a lovely Dad and daughter time.

Years later my Dad took his now wife, and she also fell in love with the place in the same way that we had years previously.

I never once suggested it to the husband, as he tends to get bored easily on holiday and I thought Stoupa would be way too quiet for him. I think he felt left out, because my Dad and his wife and I used to talk so fondly of our times there, and the husband had never been. So, eventually, and under some duress, I agreed that we would go. I warned him before we went that if he hated it he wasn’t to tell me, because he would spoil it for me!

But guess what? He loved it too! Absolutely adored the place, immediately. Such is it’s magic! And what did we do? Exactly the same as my Dad and I had done over a decade previously – eat, drink, sleep and read. We didn’t even leave the village because we were so content. Not only that, he was so taken with it that we went back 6 weeks later for our 5th wedding anniversary.

Here are some pictures of the bay.

And the mountains. Can you see the tiny villages? At night they look like little patches of sparkles in a sea of blackness because they’re so remote. 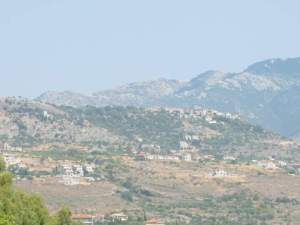 And there are the most fabulous sunsets. Every. Single. Night.

I very much want to see more of the world – all of the world – but I think I will always return to Stoupa. It holds such happy memories and is everything I could ever want in a relaxing holiday.

We talked about going back again this year, but I vetoed it because my Dad is ill. He was supposed to go last year and had to cancel because of his cancer treatment, and I don’t feel right going when he can’t.

So, this year, the husband and I are off to the other side of the peninsula – a place called Finikounda. I’ve read reports from some people that say it makes Stoupa look overly touristy, so I’m intrigued to see just how quiet it is! And of course I’ll be blogging all about it when I get home.

Do you have any summer holidays planned? Let me know!