I’m flabbergasted that it’s only been 4 weeks since I was soaking up the sun in Fuerteventura. It seems like such a long time ago, and almost like it never happened, to be honest. To prove that it did I thought I’d share a few pics!

When we arrived at our booked hotel, we were told that there wasn’t a room available for us due to water damage (the island had experienced some unusually heavy rains. I found out that, because heavy rain is so rare, many of the buildings aren’t fully waterproofed, simply because there is no need.) Panic immediately subsided when the receptionist told us we’d be moved to another hotel in the resort – a better class hotel than we had booked – at no extra cost. Result! They called us a taxi, and off we went to Hotel Elba Sara.

It was, undoubtedly, a very nice hotel but it was just so big! This isn’t the kind of hotel we would usually go for at all, because with a lot of rooms comes a lot of people using the pool/bar/restaurant. That’s not to say it wasn’t lovely, it was, but it wouldn’t be my choice. It was also much further out of the resort than the hotel we’d booked. Having said that, we were only there for 4 days so didn’t have much intention of getting out and about anyway, and with all inclusive running from breakfast time until midnight we were happy to soak up the surroundings and enjoy some chill time.

Mid 20s temperatures and blue skies aren’t to be sniffed at in November!

The hotel grounds were lovely, lots of bright flowers and a lazy river running through the gardens.

We’d noticed quite a few cats wandering around the hotel grounds, and had both commented it was unusual as generally you would expect animals to be kept away from the public. They were all very clean and well kept, very tame and loved to be fussed. Then we can across this.

It says “We are a small charity, run entirely by volunteers and have been working in Fuerteventura since 1995.Our aim is to humanely manage the homeless cat population. Each cat you see with the left ear tip missing has been sterilised.

We have installed this cat café so visitors can feed the cats here. Please put cat food and biscuits in the bowls provided and not on the surrounding ground or on the base of the café as this attracts the ants and flies. We rely on the visitors to feed the cats and to keep the area clean, a dirty cat café would reflect badly on the cats.

We depend entirely on volunteers and public donations to carry out our work.

Please help us to help the cats of Fuerteventura. Thank you from all of us at “Twinkle” and the puss cats”.

Isn’t that just adorable?! I love that the hotel encourages this instead of shooing the animals away. It shows compassion and understanding.

I’m going to cheat a little bit here, with two photographs. Ok, technically three. They are from the same destination though, and I really couldn’t choose between them as they all give me all the feels, so ner.

Both of them were taken at my favourite holiday destination on Mainland Greece. Stoupa is a small coastal resort at the base of the Tygetos mountains on the Mani peninsula and is quite possibly my favourite place on earth. I first went there about 15 years ago with my Dad, and returned many years later with my husband. I didn’t expect him to like it as it’s so quiet, but he was immediately besotted with it’s quaint charm, slow pace of life and amazing food. So much so that we went twice within 6 weeks!

The sunsets there are stunning. The contrast of the sky against the dark coastal rocks is just gorgeous.

There’s no better way to start an evening in Stoupa than sitting in a bar with a cocktail and watching the sun descend; turning the sky amazing shades of yellow, orange, red, indigo, violet and inky blue, before ending in the blackest of blacks due to lack of light pollution. During one trip the moon which followed was blood red for the whole week, which was eerie and fascinating and exciting, all at the same time.

This second picture was taken on the coastal path as we walked from Stoupa to neighbouring village Aghios Nikolaos.

The blue of the sky, the darker sea glistening under the sun and crashing in white foamy peaks against the rocks and the cool sea breeze is the epitome of being alive. It’s like an instagram filter has been placed over your eyes and brought everything into super HD quality; the blues, the greens, the sandy path, the dusty pebbles, the black rocks, the pale mountain peaks. Along the path is the occasional house with white washed walls and tumbling pink bougainvillea. It makes me feel so relaxed yet so alert, all at once. Magical.

And that’s it! The end of the 7 day photo challenge. Thank you so much to Terri-Louise at TouLou89 for nominating me, I’ve really enjoyed it. So many memories, happy thoughts and things I’d forgotten.

For my final nomination, I invite anyone who’s reading and would like to get involved. Do let me know in the comments if you take part so I can check out your posts!

We don’t generally go on all inclusive holidays (or package holidays full stop), as we’re big fans of eating out at different restaurants and having no set times in our day, but when we spotted the Conca Azzurra hotel on the Thomas Cook website it seemed ideal for our needs for this year. 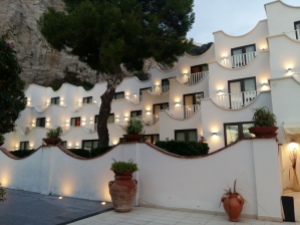 We were holidaying late, wanted a mix of city break and relaxing and the reviews were really good.

First impressions of the hotel were great; after a very long and rainy drive from the airport, we finally arrived gone 11pm to a lovely meal of cold meats, cheese, bread, rice and pasta, and the all important wine! We’d booked a junior suite with seaview (not because we’re that kind of people, just because it was the last room available!) and it really had the wow factor; huge in size, large bathroom with two sinks, jacuzzi bath and separate shower cubicle; huge comfy sofa, soft lighting and lots of storage space, with a large balcony and sliding patio doors. 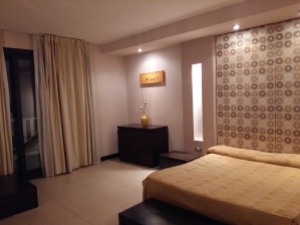 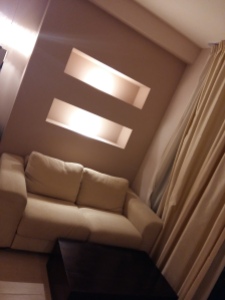 Thanks god for that suite. Because for the first two days we spent a lot of time in it. It rained from arrival and for the next 24 hours. Not “oh it’s only light rain, let’s chance it”. Thunder, lightening, wind, inches of rain. This isn’t as bad as it sounds; we pulled the big sofa in front of the balcony doors and looked out to sea. 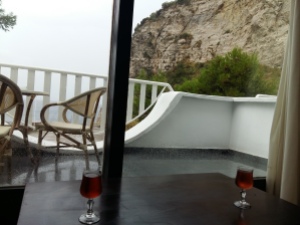 And we drank wine. Lots of wine. It was impossible to order a glass – they just gave you the bottle – so with nothing better to do we whiled away the day reading, relaxing, napping (a 2 hour booze snooze counts as a nap, right?) and having a little tipple.

It was actually pretty nice. We’ve had a hectic few weeks so being able to just chill out was lovely.

The following day started dry but very windy. The hotel is at the bottom of a cliff, it’s impossible to reach it without taking a minibus from the top to the bottom around hairpin bends and hair-raising slopes 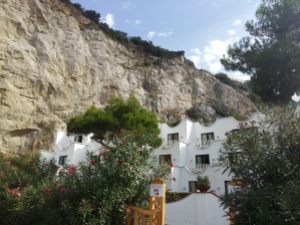 But the isolation and views are fantastic when you’re at the bottom. The sea was bashing at the cliff face and it was far from warm. We had a wander round the grounds and down to the sea.

And then it started raining again. So we did more of the first day; relaxing, sleeping. And wine.

Post storm we saw this amazing sunset. The island you can see on the horizon is Ischia. 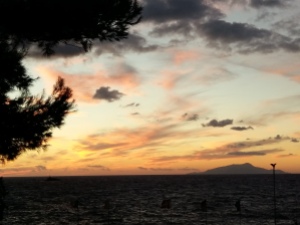 On day three the sun came out. Hurrah! We finally got to take advantage of the fabulous sun terrace which had two hot tubs, sun loungers and comfortable outdoor sofas, all looking right out to sea. 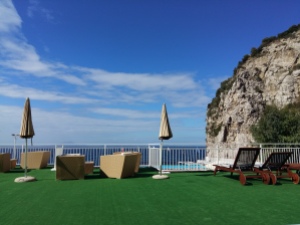 Naturally I had to indulge in some more wine (celebration!)

The hotel itself is small, with only around 35 rooms. It had a nice outdoor terrace which we were able to make use of both daytime and evening for eating and drinking.

We booked the hotel knowing that it was fairly isolated, and that it wasn’t possible to just pop out for a walk or into Sorrento. You had to get the minibus to the top of the cliff before you could get anywhere, and it’s not an area for walking. To get to Sorrento you needed to book the free shuttle bus there and back (or book an expensive taxi), so obviously there were timetables to be mindful of. But if you’ve done your research before you book then you know this. It really annoys me when people complain about something that’s made clear in advance.

The food was slightly underwhelming at first – from the reviews we’d expected gourmet meals but the reality was more rustic Italian food. Don’t get me wrong, it was tasty and well cooked and plentiful, with loads of choice at each meal. But this wasn’t the foodie holiday I had expected. I didn’t go mental and stuff my face til I felt sick, and I didn’t break the scales when I got home! (this is both good and bad in my book).

But check out these views! 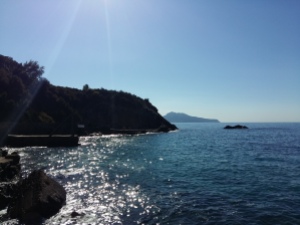 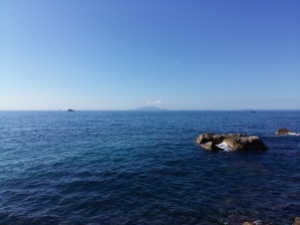 Would I stay there again? No, because there’s loads more of the world to see and I’ve done that part of Italy now. That’s no reflection on the hotel. I just don’t understand people who go back to the same place year in year out. It smacks of lack of imagination.

Have you seen my previous posts about our visits to Herculaneum and Amalfi & Positano?