Last week I flew to my happy place in Greece, a small village called Stoupa; nestled in the base of the mountains on the Mani Peninsula. I first blogged about Stoupa here. Whilst I’m not usually a fan of going back to the same place multiple times (it’s a big wide world out there, after all) there’s something to be said for finding a place in which you’re completely at ease, completely relaxed in an instant, with incredible food, scenery and people.

That place, for me, is Stoupa. Which is why I’ve been there 5 times.

It’s testament to the village that it’s hardly changed at all since I first went there around 16 years ago! And that’s the appeal of the place. Whereas holidays, for me, are often about exploring and finding where everything is, the beauty of Stoupa is that you already know everything there is to know. It’s like putting on a comfy jumper and cosy slippers.

I first went with my Dad, then my Dad and his wife went, then my husband and I went and so, after my Dad died last year, it seemed fitting that his wife, me and the husband would all go together, as we all love it so much.

With no further ado, here are my pics!

Do you have a favourite place in the world where you feel instantly relaxed and at home?

I’m aware of the irony of posting a recipe just one day after moaning about my weight! But I promised it after last weekend, and if anyone wants to give it a try this weekend they’ll need some notice to get source the ingredients, so it’s really a public service… 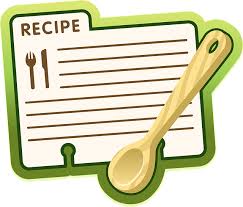 I’m a huge huge fan of lamb – if I had to go out on a limb I’d say it’s my favourite meat.

Husband is not a huge fan of lamb. In fact he regularly tells me that he doesn’t like lamb.

Contrary to that is the fact that one of his favourite dishes when we go to Greece is kleftiko. Which is lamb based. And for someone who doesn’t like lamb, eating it three nights out of the seven we were there last year would indicate otherwise.

Despite this, when I bought some lamb escalopes a couple of weeks back, the usual “I don’t really like lamb” response was wheeled out. So I went looking for a recipe to shut him up change his mind.

One of his main gripes with lamb is that it’s tough. Which it can be if not cooked well, I will grant him that. This recipe involves cooking the lamb in stock quite slowly, retaining the moisture and making it really tender (using escalopes helps as well – I’ve also tried it with leg steaks as the recipe suggests but the end result wasn’t as good, you’d probably need to cook it longer and as this was an after work dinner I didn’t have time).

Here it is step by step:

Slice baby potatoes – I leave the skin on – and par boil until slightly tender. 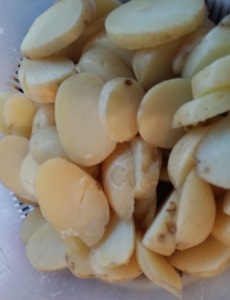 Meanwhile, add the lamb to a hot pan with olive oil and brown – this should take around 2-3 minutes. 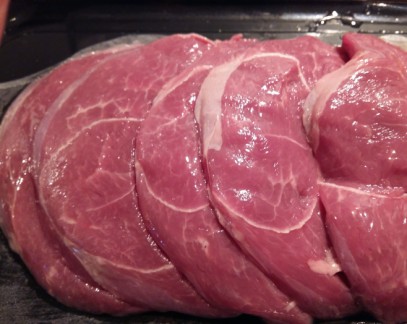 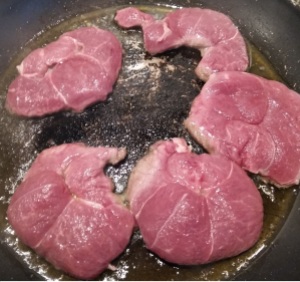 Put the browned lamb into a cooking dish.

Next, chop one red onion and 2-3 cloves of garlic. 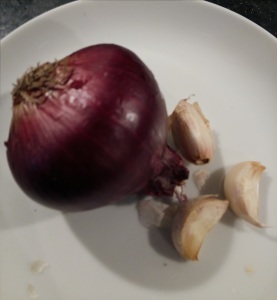 Fry the onion and garlic in the olive oil left in the pan, until soft, then add to the lamb.

Make up around 3/4 pint of lamb stock (I used lamb gravy granules for a thicker sauce – and also because I couldn’t find lamb stock cubes). Add a few splashes of Worcester sauce to taste. 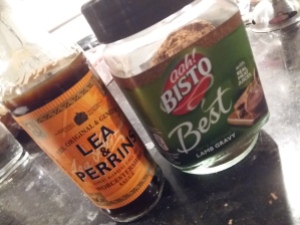 Arrange the potatoes over the top of the lamb, onion and garlic, and pour the stock/gravy over the top. 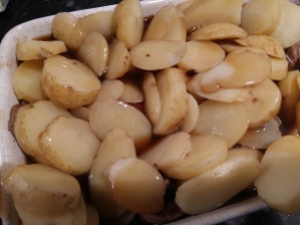 Sprinkle with dried mixed herbs (anything that calls for dried herbs rather than fresh is a winner in my lazy time constrained books). 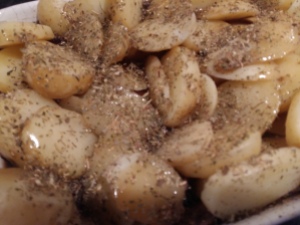 Pop it into the oven for around an hour (you may want to stir the potatoes in part way through to keep them moist, otherwise they’ll roast on the top – but this is down to personal preference).

Around 15 minutes before serving, halve some cherry tomatoes – a small packet full is good – and pop them into the sauce. Return to the oven. 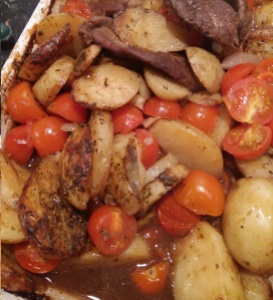 Here’s where I went off piste from the original recipe, and this is what makes it (in my opinion). Add cheese. 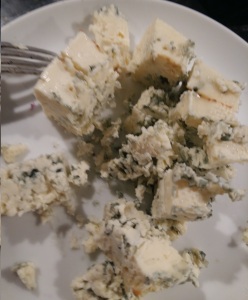 I find that blue cheese works really well because the strength of flavour cuts through and gives a real depth to the dish. I used stilton here. I’ve tried it with feta and it wasn’t quite strong enough. 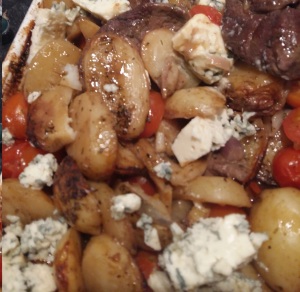 You don’t want it to melt completely, just soften up from the heat of the dish. 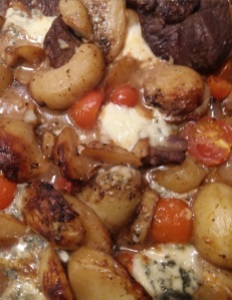 I serve this with roast parsnips and crusty bread. The latter is essential to soak up all the lovely juices. Mediterranean or olive bread is great if you can get it. Otherwise crusty white will be lovely too. Just GET BREAD. I can’t state the importance of that enough!

This is rustic cooking at it’s best. No airs and graces; just good, honest, tasty food.

You’ll notice that I haven’t specified quantities on the lamb and potatoes. I’d say use your own judgement – and appetite – as a measure. I hate being told that a recipe will serve 4 people and then the two of us eat the whole lot and feel like greedy pigs! Know your own stomach! Just make sure that the stock covers the lamb and some of the potatoes (they will soften and sink as they cook anyway).

Ironically, husband declared that this dish reminds him of his beloved kleftiko. Which isn’t surprising when you consider the list of ingredients.

Turns out he’s an in denial lamb fan after all.