As I gear up for my next holiday, I realised I haven’t blogged about my last trip, to Dubrovnik. It’s not like I haven’t had time or anything. The trip was 2 months ago and I’ve been off work for 5 weeks now <<sore point>>. But I didn’t so I’m going to correct that fact and tell you about it now.

I’m not sure when and why going to Dubrovnik became one of my travel priorities. It was definitely already right up there back in April 2016 when I wrote a list of places I wanted to visit. The architecture, city walls and coastal location made it a really appealing city break. Dubrovnik is small enough to get around in a few days. That said, there’s enough to do and see to fill the time and feel the city. Of course, later we started watching Game of Thrones, some of which is filmed in Dubrovnik, and my interest was piqued.

We stayed outside of the city walls, in the Ploce area of the city. Meaning we woke up to the iconic city view of Dubrovnik from our terrace each morning.

This, to me, was more important than being right in the city centre. It meant we could choose accommodation with outside space (more of a rarity in the city) and enjoy a sea view. Plus, importantly, we were dropped off and picked up right outside our accommodation. No taxis or private vehicles are allowed inside the city walls so you could face quite a walk with your luggage. Oh, and it was cheaper too.

Looking left from our terrace was a view of Lokrum island. 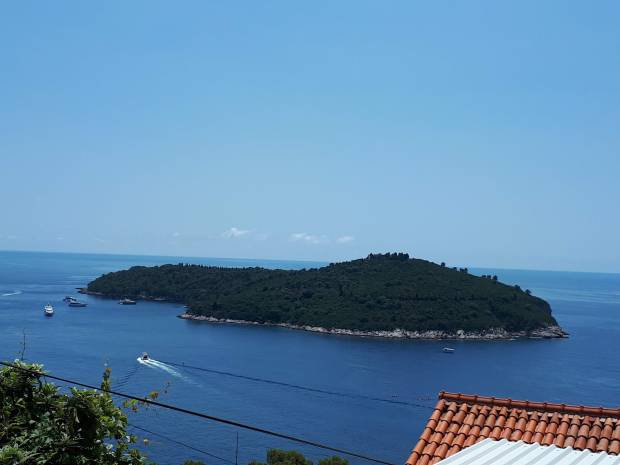 I’d recommend the Ploce area for the above reasons. BUT do be aware that it is very steep with hundreds of steps. Think about it – to get those iconic city views you need to be quite high up. Walking down is tough enough, but walking back up in the heat of the day is a killer. Actually make that any time of day!

Uber to the rescue

I’d read before we went that Uber taxis are plentiful and cheap so, after doing the walk once, we used a cab every time. Most phone providers allow you to use your phone plan including data in Croatia, so just download the app and let them take the strain. It usually cost about £3 for a one way journey, which was nothing between the three of us, and in a short break it doesn’t really add up too much. Plus, steps. Seriously. Without the cab I’d have spent a lot more time in the apartment, with broken hamstrings.

Speaking of the apartment, I found it on Booking.com which has a good range of accommodation of all types. Ours was a 2 bedroom apartment with a lounge, kitchen diner, bathroom, and a huge terrace with those city views.

It made the trip feel a bit more like a holiday than just a city break. It meant we could eat breakfast outside in the morning, or sit and relax in the afternoon and evening sun after a day of sightseeing. From what I saw during my research, much of the accommodation in Dubrovnik is in private independently owned apartments which are quite dated in style. Don’t be surprised to find a blue bathroom suite or 80s décor. The larger, more cosmopolitan hotels are further away from the Old Town. Inside the City Walls expect to have to carry or wheel your suitcase over bumpy cobbles, and potentially up many narrow stairs if you’re staying on one of the steep side streets.

So, the city itself. As I said, the main part of Dubrovnik is inside the City Walls, accessible from Ploce Gate on one side and Pile Gate on the other. Ploce Gate was, in our experience, the lesser used of the two entrances and a more dramatic (therefore enjoyable) experience.

You have views of the sea, and the old harbour, and Lokrum Island, plus of course the steep walls surrounding the city and back towards Ploce.

Most cruise ship arrivals (of which there are many in high summer) use Pile Gate. It’s so busy there’s an operational one way walking system for in and out. Don’t confuse entering the City Walls (to get into the city centre, which is free), with visiting the City Walls (which is a walk around the summit of the walls and is chargeable).

The Old Town is fairly compact and it’s easy to get your bearings and to get around. The main street (Stradun) runs from the Ploce Gate side to the Pile Gate side. The smaller streets mainly form a grid system, with narrow passageways crammed with eateries which occasionally open up into larger squares. It’s incredibly clean with beautiful architecture.

For a different view of the city, take to the sea!

The ferry to Lokrum Island (more on that another time) will give you a different perspective on the port. But it’s also worth going on a speedboat trip which takes you to the other side of the city walls along the coastline.

It then heads out to and and all the way round Lokrum, before sailing back along the Adriatic coastline. In contrast, the Lokrum ferry only goes to the port, so you won’t see the “back” of the island, including the stunning cave below with crystal clear water.

We paid 40 euros total for a private 45 minute trip for 3 people. It was 30 euros total to share with other people, so it was a no brainer! There are lots of boat trips available from the Old Town harbour. You’ll see from the pics you can also do sea kayaking over to Lokrum, but no thank you!

Dubrovnik is just as beautiful by night. Everything is lit up and reflections twinkle in the water. The white marble floor of the main street (Stradun) glistens; there’s almost an other worldy glow about the city.

In my next Dubrovnik post I’ll talk about visiting the city walls (hint, there were a lot more steps!) and the cable car to Mount Srd.

Have you been to Dubrovnik? Let me know in the comments!