When you have an early start at an airport it makes sense to get there, check in and have something to eat while you’re waiting for your flight. I usually get the fear of not knowing when I’m going to eat again (this also happens to me on car journeys of more than 1 hour) so not eating is not an option.

I’m not much of a traditional breakfast person, I really have to fancy the sausage/bacon/eggs combo that is so prevalent at breakfast time, so when we were going to Malaysia last year and the husband told me he’d researched eating options at Heathrow terminal 4 and found something that was right up my street I was intrigued.

(as an aside, the reason I didn’t know what was there myself was that I thought we were flying from T2, had booked our pre flight hotel near to T2 and had looked at breakfast options at T2. D’oh)

Comptoir Libanais is classed as a Lebanese canteen, serving traditional Lebanese cuisine alongside more traditional options. Now, this is a chain restaurant, and a chain in an airport at that, plus I’ve never eaten Lebanese food, so I don’t know how good it is compared with other Lebanese restaurants, but I really enjoyed it!

The restaurant is decorated with lots of bright colours, tiles, wicker and storage tins, with wooden tables and chairs. 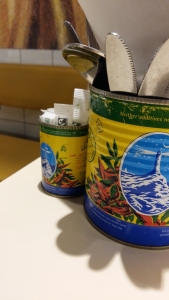 Table service is offered and the waitress was incredibly friendly and smiley (2 things I couldn’t be if I was serving food to people going on holiday while I was stuck working).

So, what had the husband found that was right up my street? Shakshuka with Sojok. Don’t go thinking he picks out what I do and don’t eat, because that definitely doesn’t happen, but as soon as I saw the menu I said “I want that” and he told me that was what he thought I’d go for. The combination of Middle Eastern spices and flavours with the lamb sausage had my name written all over it (well, not really, my name isn’t Sojok, but you know what I mean), with pita bread to mop up all that delicious sauce.

I said at the time, and till stand by this, that it would be a nice thing to try and recreate at home, but being as it’s 11 month since we we had it the chances of me realistically doing it are probably slim. 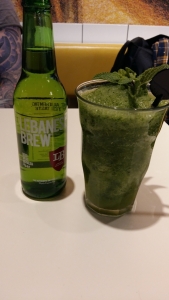 I paired my food with a Minta frozen vodka (don’t judge me, I was on holiday!) which, honestly? Was a bit like drinking alcoholic grass, because it contained all the mint, shredded up into leafy mintness and it was so overpowering that I couldn’t taste any other flavours (lemon, lime and orange blossom, apparently) but I drank it anyway because it contained vodka (I don’t like to waste alcohol) and it cost £7.95 which was as much as my breakfast.

Conclusion – I’d definitely recommend it if you fancy something a bit different, but have a different drink!

Are you a traditional breakfast person? Or do you prefer something a bit different?