With this week marking the start of a new term and “back to school” in the UK after the long six weeks holiday (RIP quiet roads and stress free commutes to work), I’m sure that there are kids – and parents – across the country who are worried about going back to school or starting a new school, the potential for bullying (such a problem, which is seemingly getting worse), or even just not making any friends.

Imagine then being a young immigrant from Syria, coming to the UK and starting school in Manchester; knowing no-one and not knowing what the attitude towards you will be in view of the negative press that refugees receive. Pretty stressful eh?

Praise then for 12 year old Jack, who saw new boy Rani sitting alone and invited him to join his group of friends. The boys bond over a love of sports and Jack helps Rani with his English skills proving that, despite their different upbringings and backgrounds, friendship can bridge gaps. Aw! 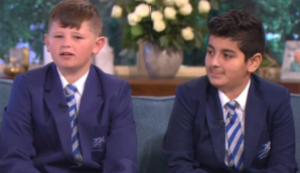 Watch Jack and Rani being interviewed on This Morning with Ruth and Eamonn.