Just because I don’t make resolutions, doesn’t mean I don’t make plans. The beginning of a New Year yields opportunities such as a whole load of annual leave to book, as well as a summer of fun, and music to enjoy. 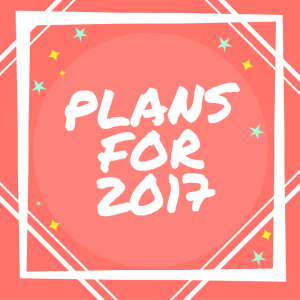 Move house
This is a biggy! We’ve lived in our flat for almost 11 years, even though when we moved in the plan was to only stay for 5. We’ve been so incredibly happy and settled there and never both felt like the time was right to move but now we’re both ready to take the next step (although I’m not looking forward to stairs, I love one level living!) We want a garden where we can have friends round for barbecues and have wooden sunloungers with drinks holders, and we want another spare bedroom which I can have as a dressing room and display all my shoes in an MTV cribs style (yet to be agreed with the husband). Unfortunately we have a very small search area and also need a garage (rarity where we live) so we’re going to end up like those annoying couples on Location, Location, Location who are so picky you just want to shout at the TV that they don’t even deserve a home of their own.

Go to Whitby
Part of my birthday present was a weekend in Whitby, at a future date of my choice. Home of Dracula, Whitby has the stunning abbey ruins, a pretty harbour and the super cool Bats & Broomsticks guesthouse, which is where we’ll be staying. Each room is decorated individually and the candle lit breakfast room is in the basement. It has nothing but brilliant reviews so that’s one to look forward to.

Go to Malaysia
This is booked and in the bag – we fly at the end of April. I’ve always wanted to travel East and although Malaysia has never really been on my radar this appeared as a deal that was way too good to turn down. We’re spending 5 nights in Penang and 3 nights in Kuala Lumpur and it’s very exciting because we’ve never done a trip like this before. Oh, and imagine the food!

See Guns n Roses
I don’t actually love Guns n Roses (I find Axl pretty screechy at times tbh) but I do love some of their songs and the husband has a lifelong love of the band so when they announced a tour with 3 of the 5 original members it was a done deal that we would go. Lots of our friends are going too so it will be a cool day and night out at the Olympic stadium, although the ticket cost of £95 is disgusting, especially when you consider that £9.99 of that is a transaction fee. Per ticket. Bullshit.

Change my car
I do a 60 mile round trip to work each day so the miles have quickly clocked up on my car. I think it might be best to change it now before the mileage gets too high and affects the value, although I have no idea what I want instead.

Get back into blogging
The end of last year was not good for me – I (understandably) lost my mojo and blogging took a back seat. But I’m feeling inspired again with lots to talk about and, having blogged more regularly so far in January, it feels good to be productive again.

Start contributing to My Trending Stories
Last autumn I was contacted on Instagram by a representative for My Trending Stories, inviting me to become a contributor. I’ve seen some people suggesting that the website is trying to piggy back on successful bloggers, but I’m just an iddy biddy blogger with a small audience, so they’re certainly not taking advantage of me! Anyway, it was a compliment to be invited and it’s another outlet to share my thoughts and interact with other people so why not?

I’ve seen lots of resolutions around people eating more healthily, going to the gym, etc but it would be pointless me including them in my plans, because it would be an out and out lie! I can only be who I am, unfortunately!

Have you made any resolutions or plans? Leave me your links in the comments box!