Sometimes I think that people should be made to take an entrance exam
before they use the internet. Maybe an intelligence test. Certainly
psychoanalysis.

Yesterday I responded to a tweet from our local village forum that said
cycle lanes have been planned on the main road, which means double
yellow lines will be introduced, which will mean the loss of much
needed parking. The residential roads nearby are already overcrowded
with cars – often from people who are just visiting the area – and if
this plan comes into force people may have to park their cars half a
mile away from their home.

Even though this doesn’t personally affect me as I don’t live in the
centre, I think it’s a bad idea. I don’t think it’s fair that someone
would buy a house with an expectation of parking and then that parking
would be taken away. It’s like if you buy a house with a view and then
someone builds a bigger house in front of it. The view doesn’t
“belong” to you, but you’d be pretty peeved.

Anyway, there were a few exchanges of tweets with a pro-cyclist and
myself and another local and that was that.

Or so I thought.

Many hours later an individual unknown to me pops up and, with no
preamble or escalation of conversation, tweets this at me!

I was pretty flabbergasted!
a) to be accused of being racist
b) at the ridiculous comparison between cyclists and ethnicity
c) at the barrage of abuse that continued! 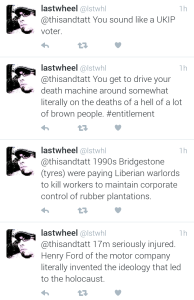 And then he added me a to a list called “cyclophobes”! He’s going to
be pretty disappointed, because I mainly tweet about food, my blog and
pretty clothes.

The internet; giving stupid people a platform to promote idiocy with
no recourse.

Absolute “Twit of the Day”

0 comments on Twit(ter) of the Day award