…er, except it does.

About 3 years ago, in preparation for my holiday to LA, I decided I wanted to lose weight. So for about 3 months I did the SlimFast diet, I cut out drinking in the week, I upped my exercise. And I used that phrase in my head when temptation hit me; imagining myself swanning around LA being a skinny mini and happier than ever.

I did lose weight. But it was probably disproportionate to the effort I put in. Some days I was exercising twice a day. I was having a liquid breakfast and lunch. And in 3 months I only shifted about a stone.

The truth is I just don’t lose weight that easily.

On the plus side I don’t put it on that easily either. With the amount I eat and drink I should be a lot porkier.

Case in point, you may remember a couple of weeks back I talked about exercising. Well I rejoined the gym, and have been doing cardio and weights, and the scales said I’d put two pounds on! (I know I shouldn’t be governed by the scales, but it’s engrained in all women, no?)

Now I haven’t been to the gym for a week, and I had takeaway on Friday, burger at the festival on Saturday, roast dinner at the pub on Sunday, Thai food on Monday, carbs on Tuesday and curry on Wednesday, all washed down with copious amounts of wine and vodka, and those two pounds have disappeared.

Does this tell me that eating out is good for me? (if there were a God that would be true!) Is my own home cooked healthy food making me gain weight? (I can see that going down well as a reason I don’t cook anymore!)

It’s definitely more difficult to lose weight as you get older (for most people). It’s also harder to lose weight when you have a foodie partner in crime and very little willpower.

But the main reason it’s difficult to lose weight is that food is fantastic. I mean, really really good. Like, daydreamworthy good. I bet you could think of something, right now, that would make your mouth water. In my case I can think of many things. 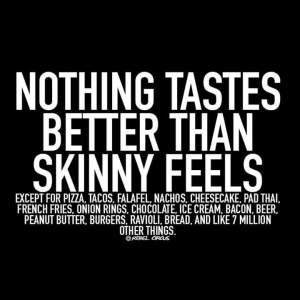 And life’s too short to deprive yourself.

So I will keep up the exercise and try to cut down on wine.

But that half a stone I wanted to lose before Italy? I might just have to take it with me after all…

One thought on “Nothing tastes as good as skinny feels…”