I had a dream last night that I decided to have some last minute highlights prior to going to a wedding. The hairdresser asked how much I wanted cut off my hair and I insisted on just the slightest of trims. But she cut my shortest layer to around 1 inch all over the top of my head.

Thank god it was just a dream!

My hair has been on my mind (figuratively as well as literally) for the past few days. Following my brain meanderings a couple of weeks ago, I’m kind of at the “let it grow” stage; probably influenced by a quick straw poll of friends and family (weak minded, easily influenced, indecisive wench that I am) where the general consensus was it looks better long. Swines. Of course I could buck the trend. But I’m not really sure myself. So I’m going to try a lob (snigger). Long bob, not anything rude.

Strangely, this morning, I’d been wondering how to inject some life into my barnet during this dull in between stage; concluding that dark red might be the way to go. Coincidentally I then exchanged some texts with my mobile hairdresser friend who I mentioned previously, who I found out reads my blog (“Hi Cookie!”) and, without prompting, she suggested going back to red.

I haven’t been red for around 3 years. Because my natural colour is pretty dark, I can’t go bright bright red without bleach (a step too far for an amateur hairdresser like me), but I reached a pleasing hue with regular dye. It’s a faff to keep up and white towels are a no no, and I ended up going back to dark/black as red lacked shine, but I’m craving a change.

So, here’s my Flashback Friday gallery. I may be harking back to some of the hair colours because I look so young. I’m very partial to the blond streaked front, but I was a decade younger then. It’s the face I’m craving, as much as the hair! 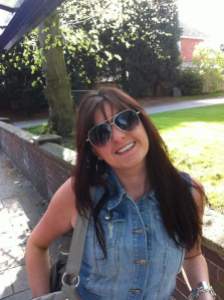 Obviously the much shorter length will make a difference this time around. So watch this space!